This  past Saturday Track Shack turned the streets of Casselberry into a 3.1 mile rock concert complete with beer and extra food at the after party. At approximately 7:30am Mayor Charlene Glancy set runners on their way to run through a battle of the bands and face their own competitive fates. Though many would return in less time than a live rendition of “Free Bird,” others took the opportunity to see some of the area’s best up and coming bands more seriously. 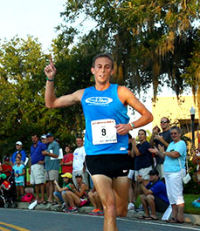 Just as quickly as the starting horn sounded and the bands struck up their tunes, Paul Neilson took the lead in the men’s race. With his quick start Neilson quickly separated from the main pack, and created a three man contingent up front. Sitting in Neilson’s slipstream was former 14 minute 5,000m man and current masters athlete William Vanos, and sliding along right behind him was another Orlando native, Seth Proctor.

Coming through the mile in 4:45 it was still the same order, and it looked like the race was shaping up to be a barn burner with Vanos running like a renewed athlete, Proctor , the recent Florida State graduate, looking like he may have regained his collegiate 29 minute 10,000m form, and the fit, experienced 2:25 marathoner Neilson up front dragging them both along. The potential for group of three to continue on rocking at such a pace and end in a furious kick for the finish soon fizzled, however. By 1.5 miles Neilson had opened a gap on Vanos that would only grow as the race progressed, and Proctor began fading to an eventual fourth as he would be caught and gapped by Nicholas Sterghos of Clermont. Neilson would go on to win by 20 seconds in the steamy conditions 15:24 to 15:44. 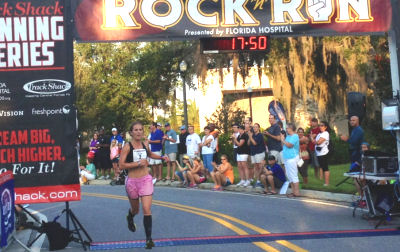 Women’s champion Natasha Yaremczuk was thinking along the same lines as Neilson, as she took the women’s race by the horns. Yaremczuk caught the crazy train and stormed through a first mile in 5:20 before settling in and finishing up 21 seconds on second placer Erica Weitz 17:50 to 18:11. Yaremczuk will be competing as an elite athlete in this weekend’s Mighty Niagara Half Marathon, and seems well primed for a quality run after this weekend’s performance in the sultry Florida heat.

After Saturday’s romps to victory Neilson and Yaremczuk further strengthen their leads. Neilson holds a perfect record and 200 points, which puts him 40 ahead of Vanos with 160, and a 3-way tie between Sterghos, Proctor, and another Masters athlete, Alan Wells at 110 points each. Yaremczuk also has a perfect scorecard and leads Weitz by 40 points, 200 to 160. They are followed by Heather Schultz who holds 3rd by a 30 points over Laura Bowerman and Rafaella Gibbons who are tied with 100. 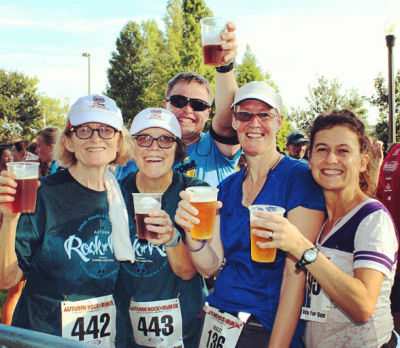 As the rest of the field streamed across the line and into the post race party, headline band Spayed Koolie put the dials to 11. Post-race festivities saw Florida Hospital on site providing flexibility assessments and consultations to finishers as they made their way through the tent city and the quickly filled beer garden. As racers got their glasses filled and re-carbed on fermented goodness and cool Planet Smoothie concoctions, they cast their votes for the winner of the battle of the bands. Local band “Underhill” ended up the champion on the day after a close race.

There are four more races left in the Track Shack Running Series - plenty of time for athletes to get injured, regain form, plateau, or find new greatness.  The next test for our leaders will come in four weeks at October’s UCF’s signature U Can Finish 5 miler and 2 mile presented by Florida Hospital.